Hike of the Week

So, I'm trying this new thing: hiking.  The explanation requires some background information.
Two years ago, I herniated two discs in my back.  L4 and L5, to be exact.  It was painful.  Like, couldn't walk or stand or crawl or move even a few inches painful.  For a long period of time.  My Dr. said surgery is the only option.  I refused to hear that and spent roughly $10K on a chiropractor (and associated stuff) over the next year.  The last visit to the chiropractor was roughly a year ago.  I didn't intend for it to be my last, but he said (as I was having significant issues walking that particular day) "We are just going to have to get more aggressive."  Umm...yeah.  Mostly, that translated into more frequent adjustments.  I was out of money.  I went to physical therapy (at least, insurance kind of pays for that).  After 6-8 weeks, they sent me on my way.  "Nothing more we can do", they told me.
Back pain sucks.  Sciatica sucks even more.  Not being able to walk or complete any type of movement without significant assistance from another human being?  Sucks.
For most of this past year, the pain has been fairly minimal.  With the exception of a few "couple of week" attacks, it hasn't been bad at all.  Fast forward to now.  Ugh.  Since Christmas, actually.  I think I had an ok-ish week in there, but really, since Christmas.
I can't do this.  I'm 40, not 80.  I should be able to put on my own socks.
Walking and trying to become as flexible as possible is my last ditch plan.  Last ditch before what, I don't know.  I've got all my remaining eggs in this last basket.
So, I bought hiking shoes.  And have determined to go on hikes.  One official hike per week with unofficial stuff happening in between.
Philosophically, I don't know where walking ends and hiking begins.  Does it even matter?  Philosophically, I don't believe in just having surgery at the drop of a hat.  If the body can heal itself on the outside, why not the inside?
Anyway...that's what that's all about.
It was just Pip and I this outing.  We managed.
﻿ 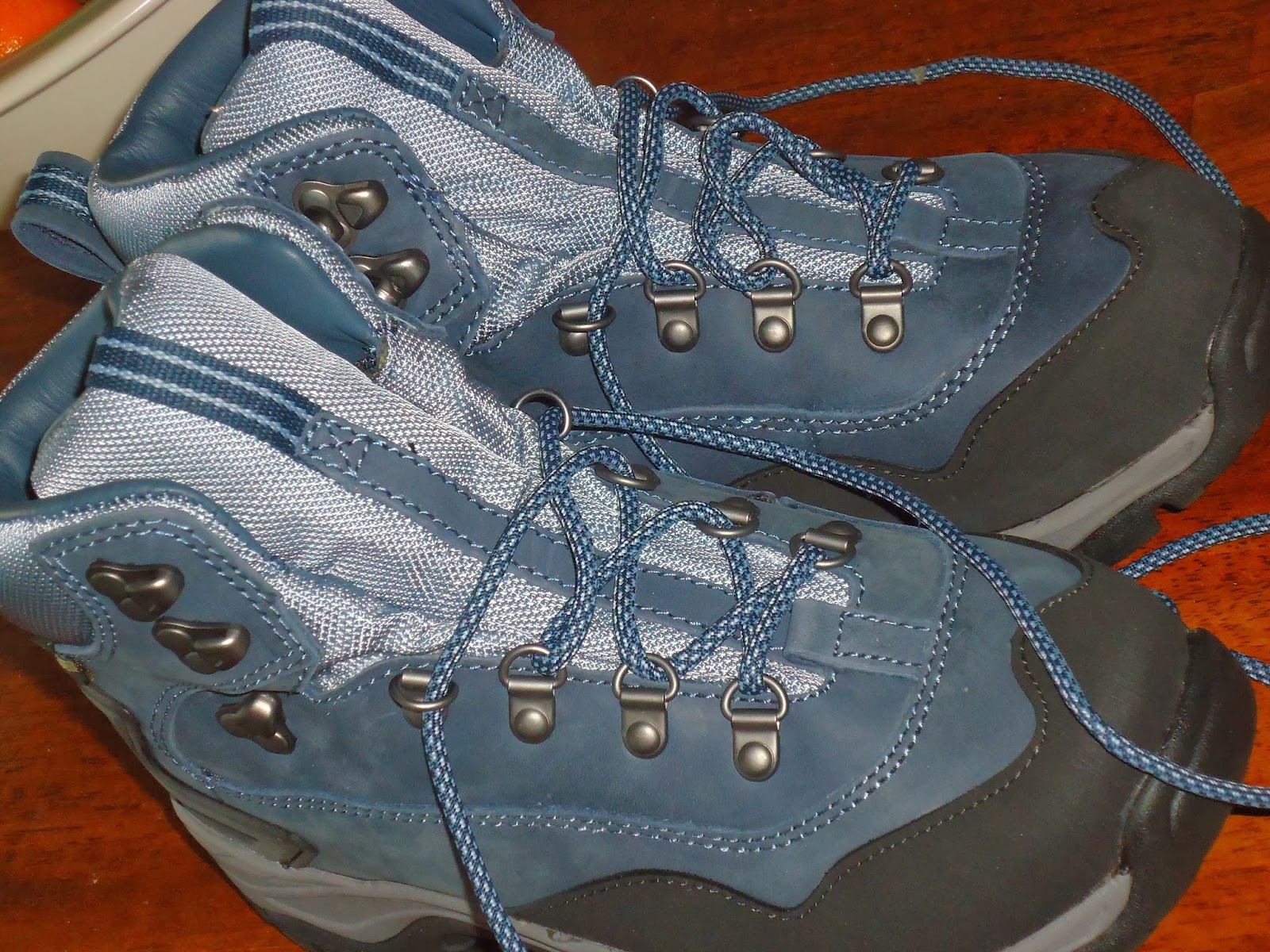 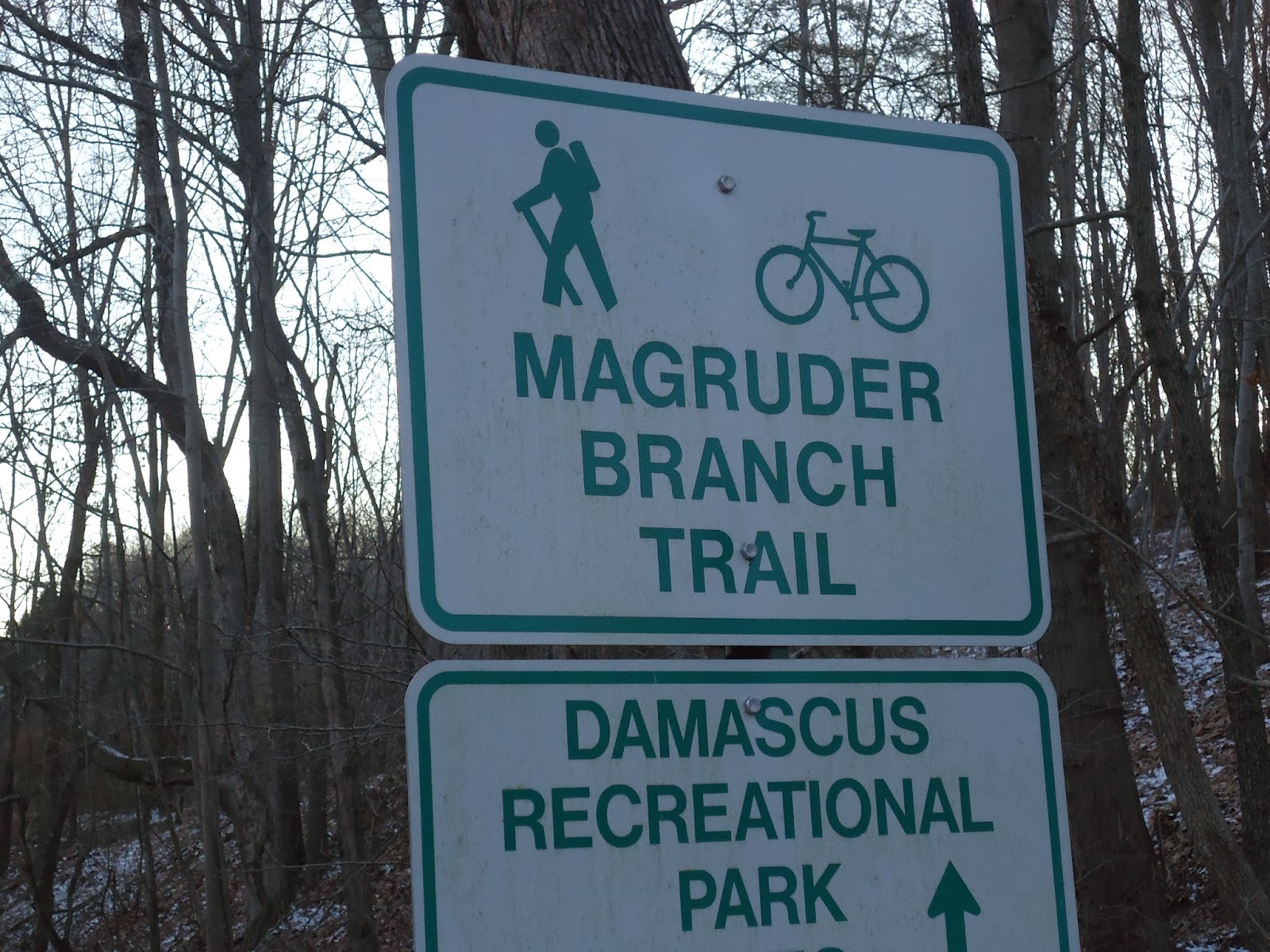 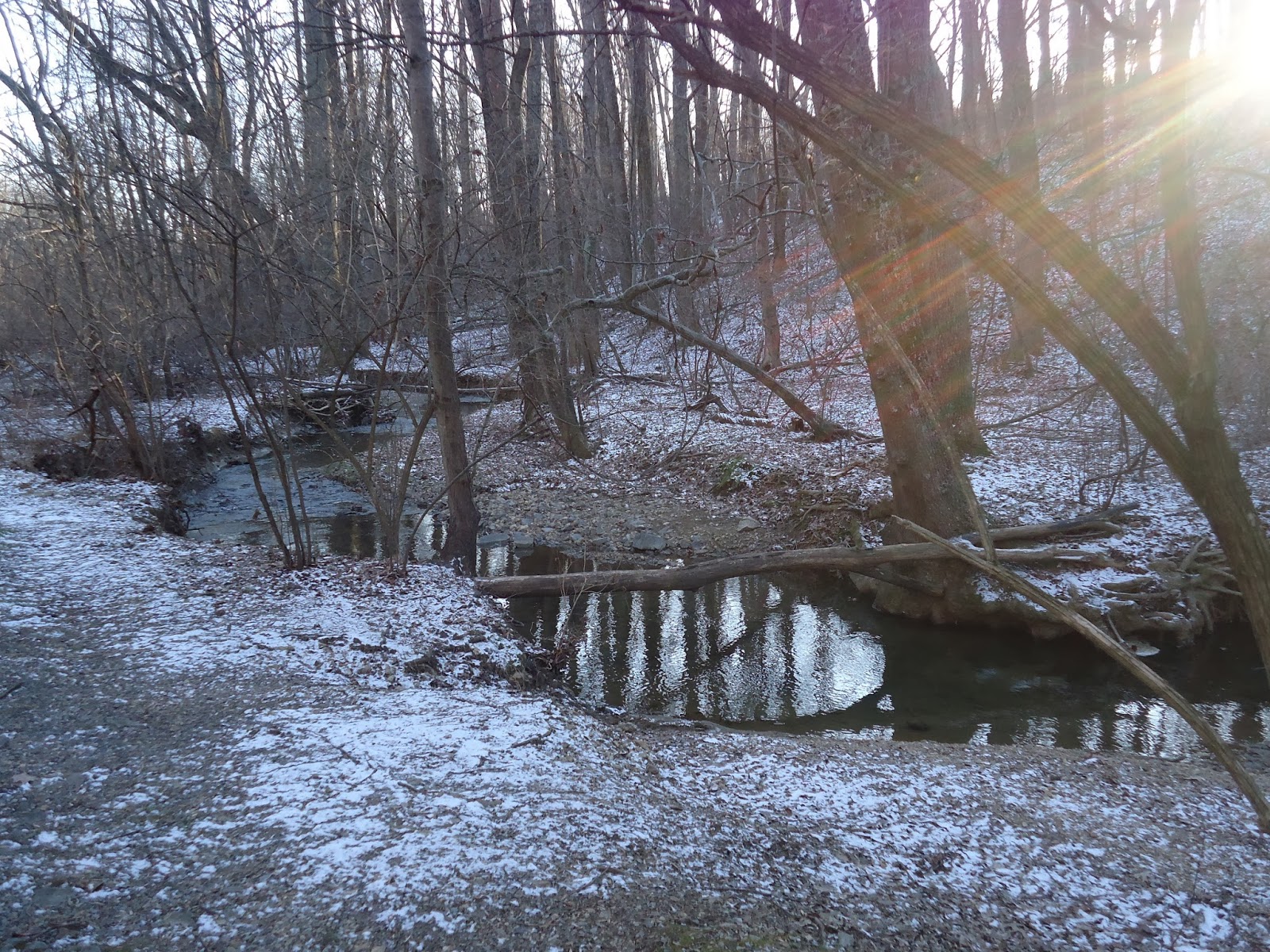 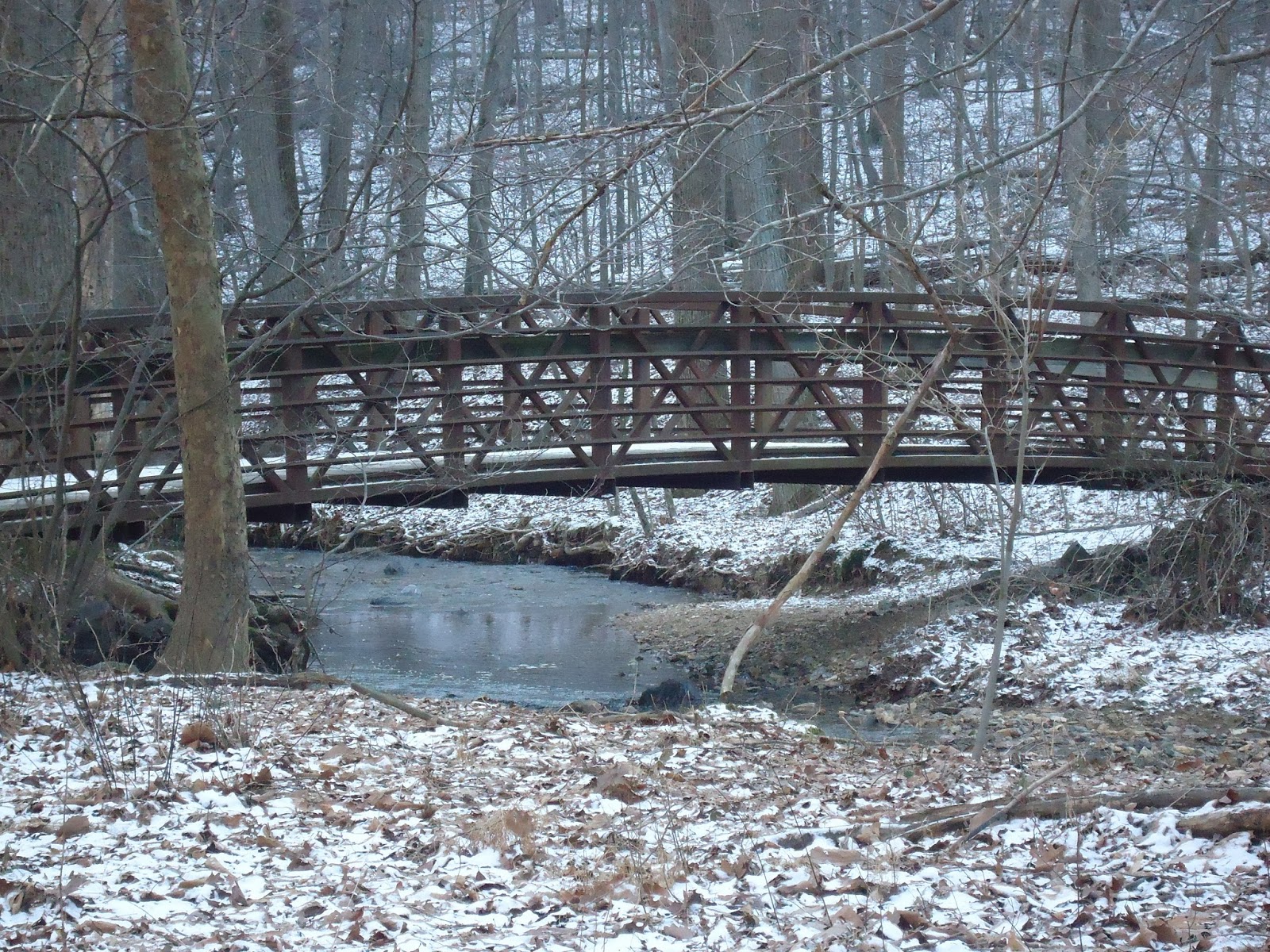 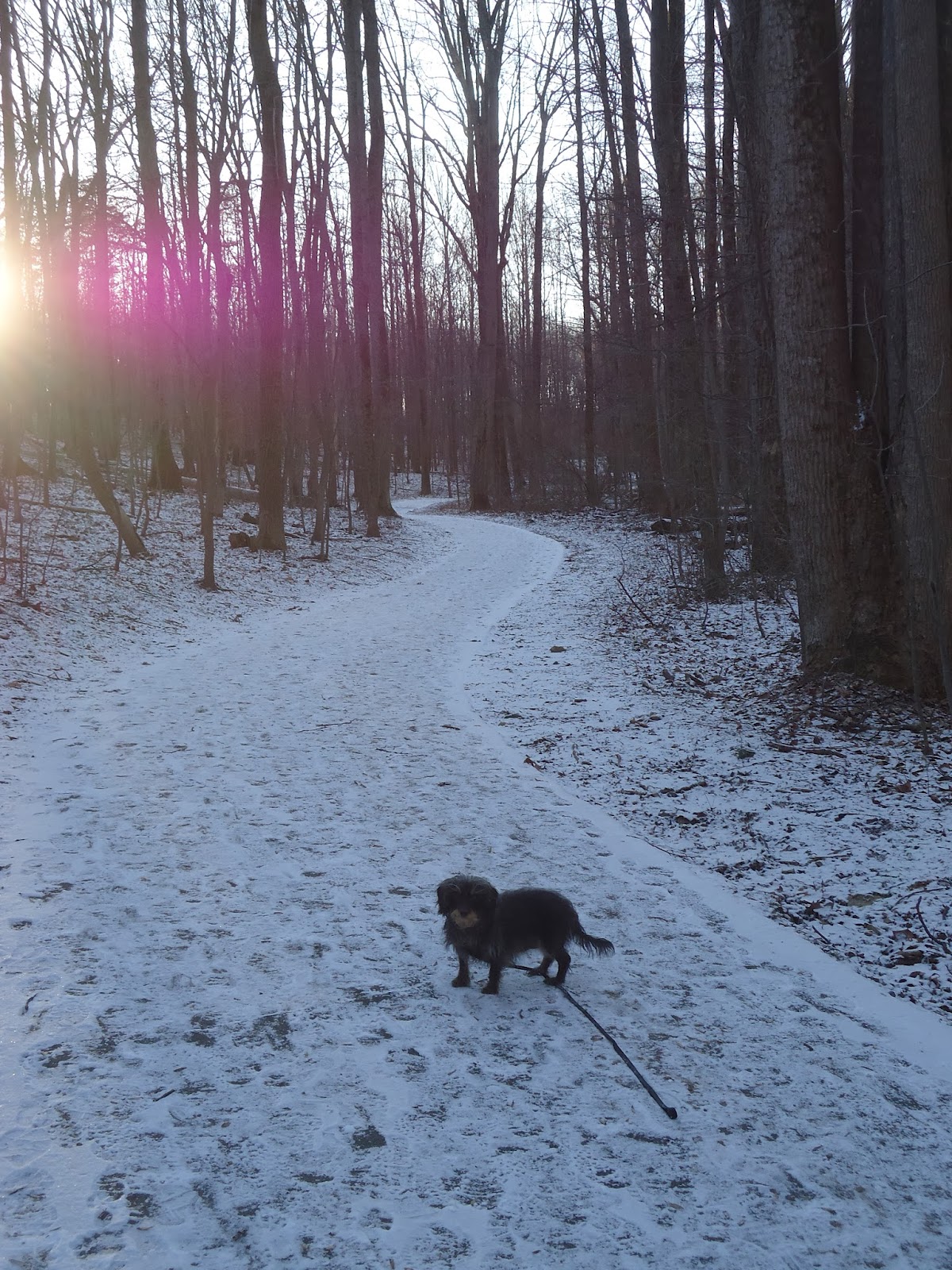 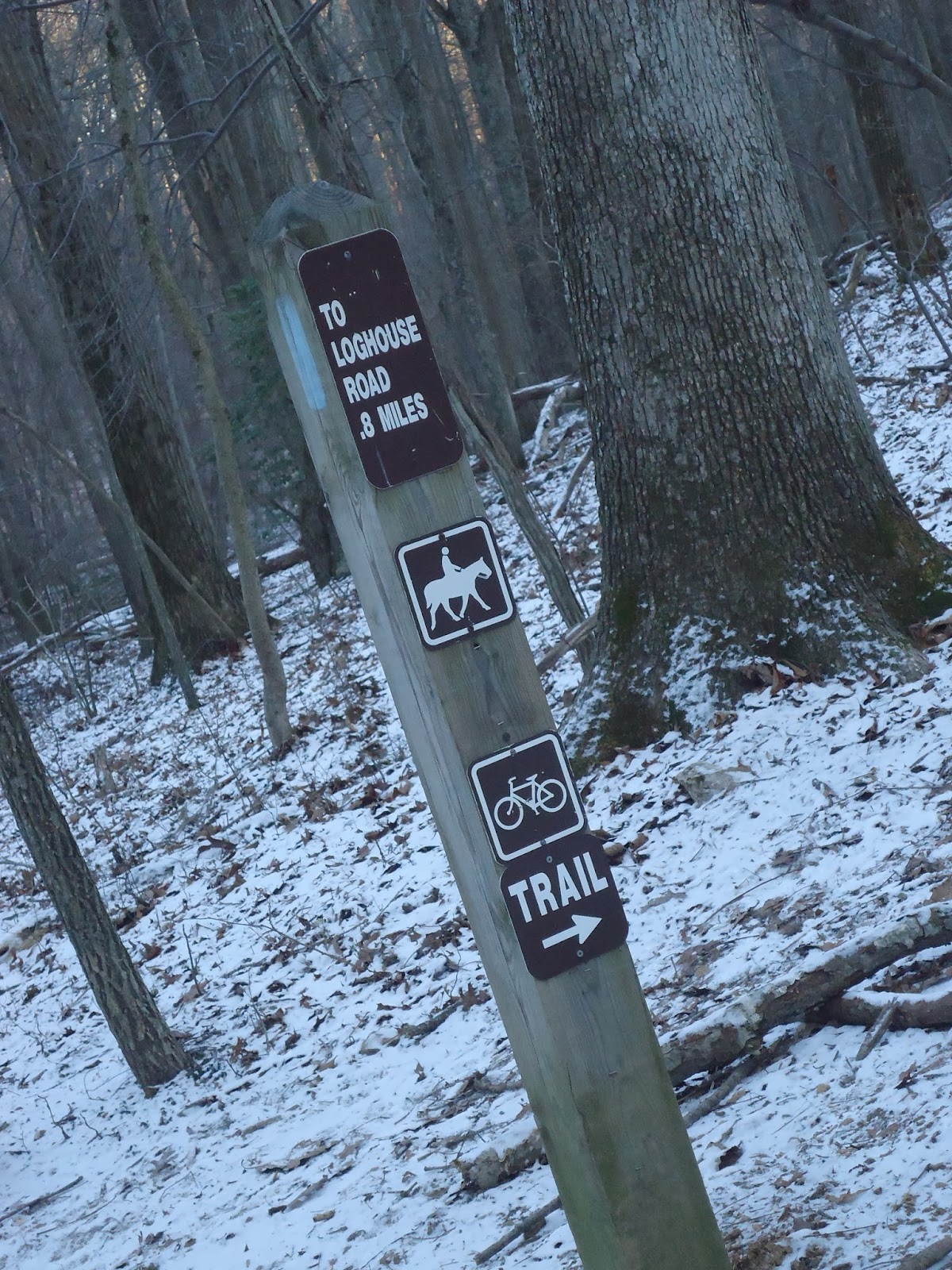 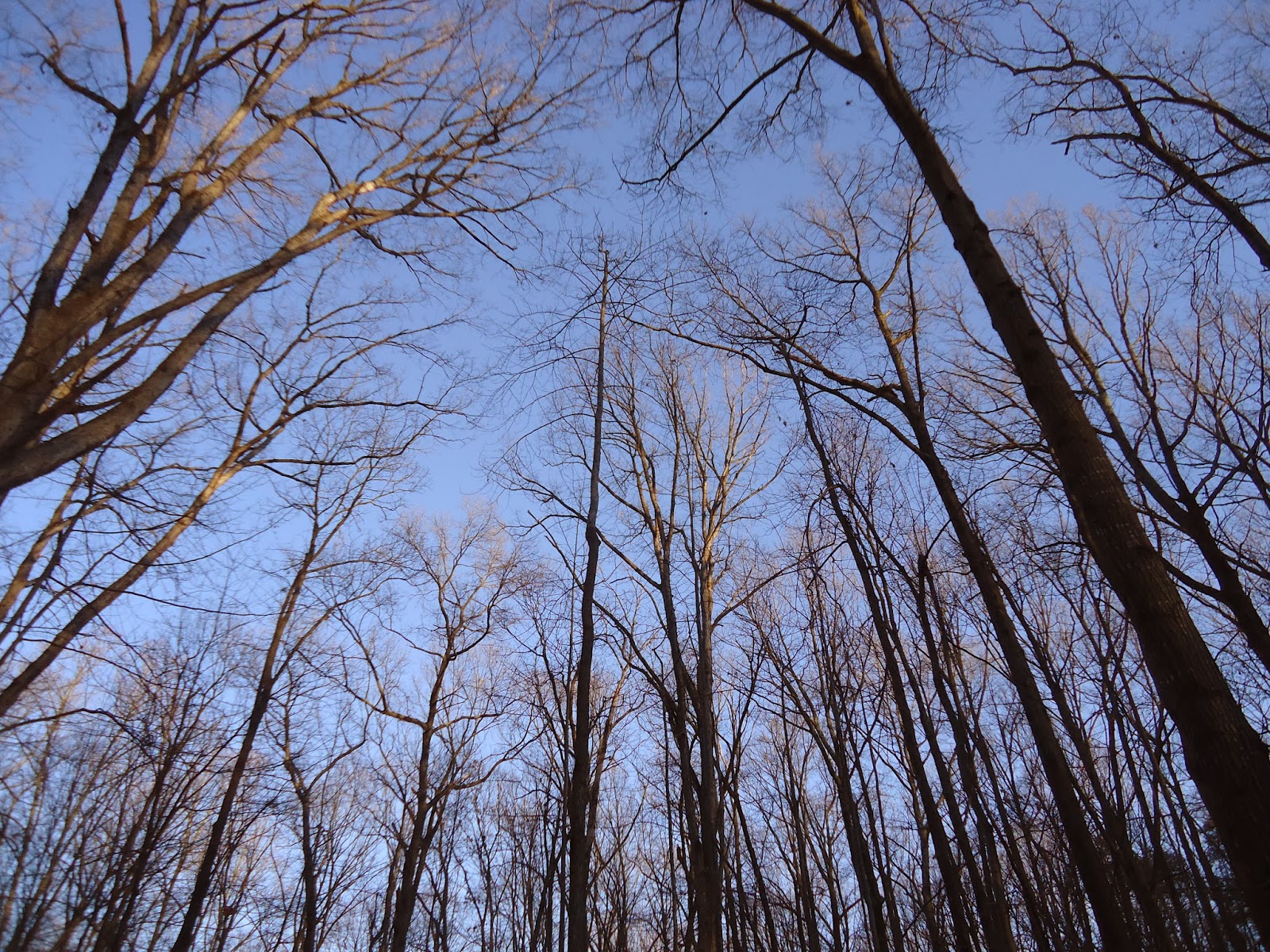 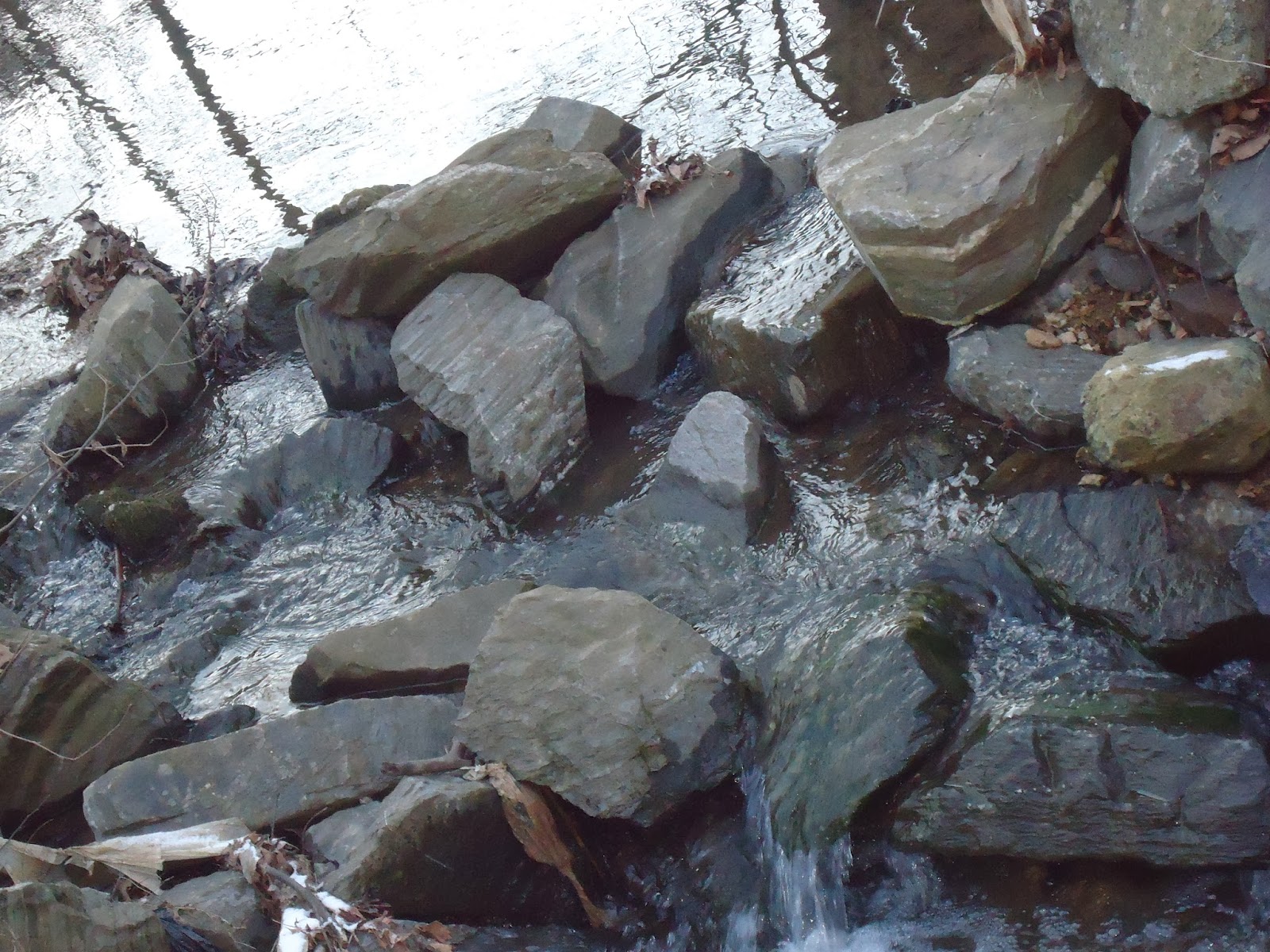 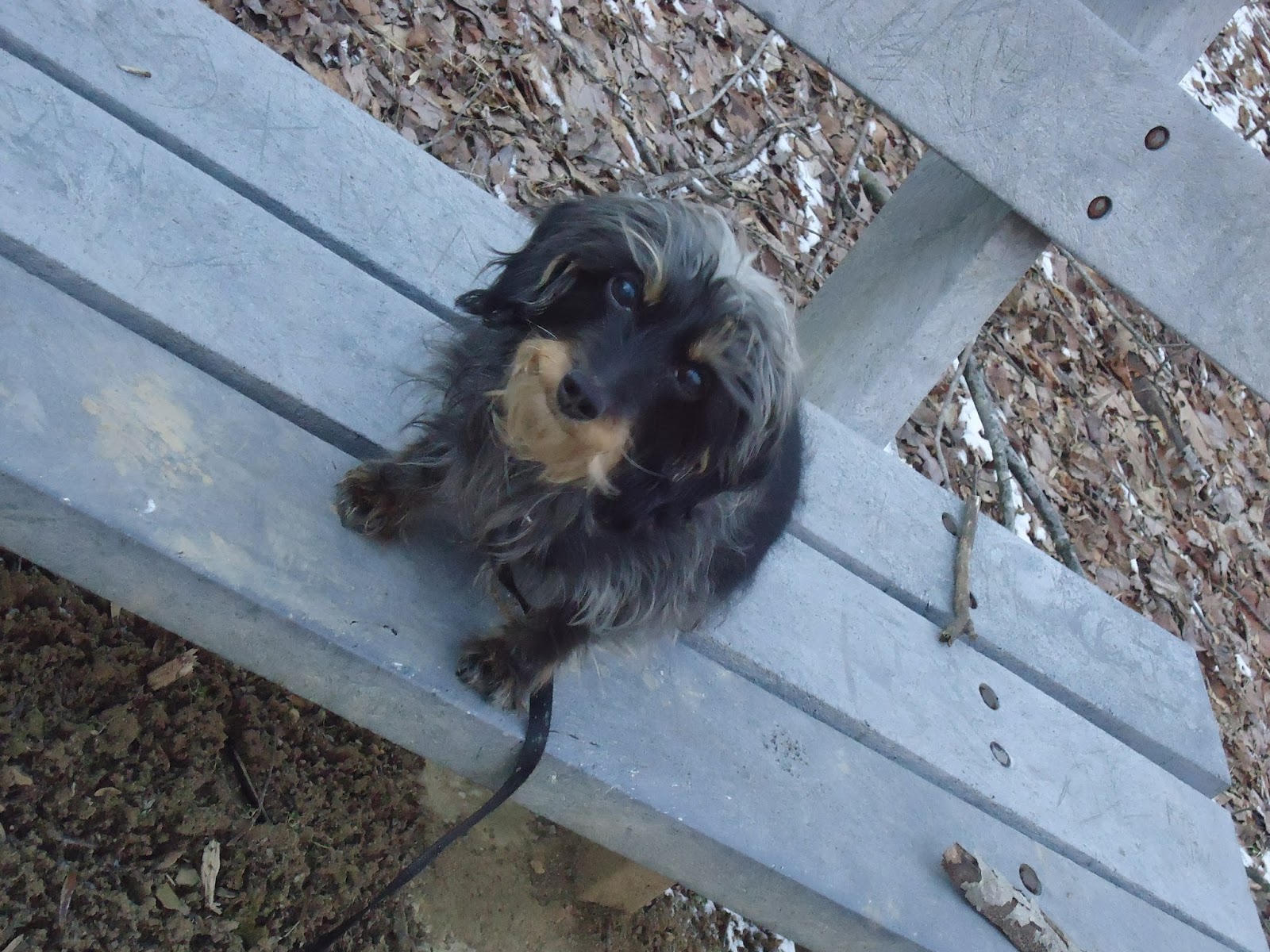 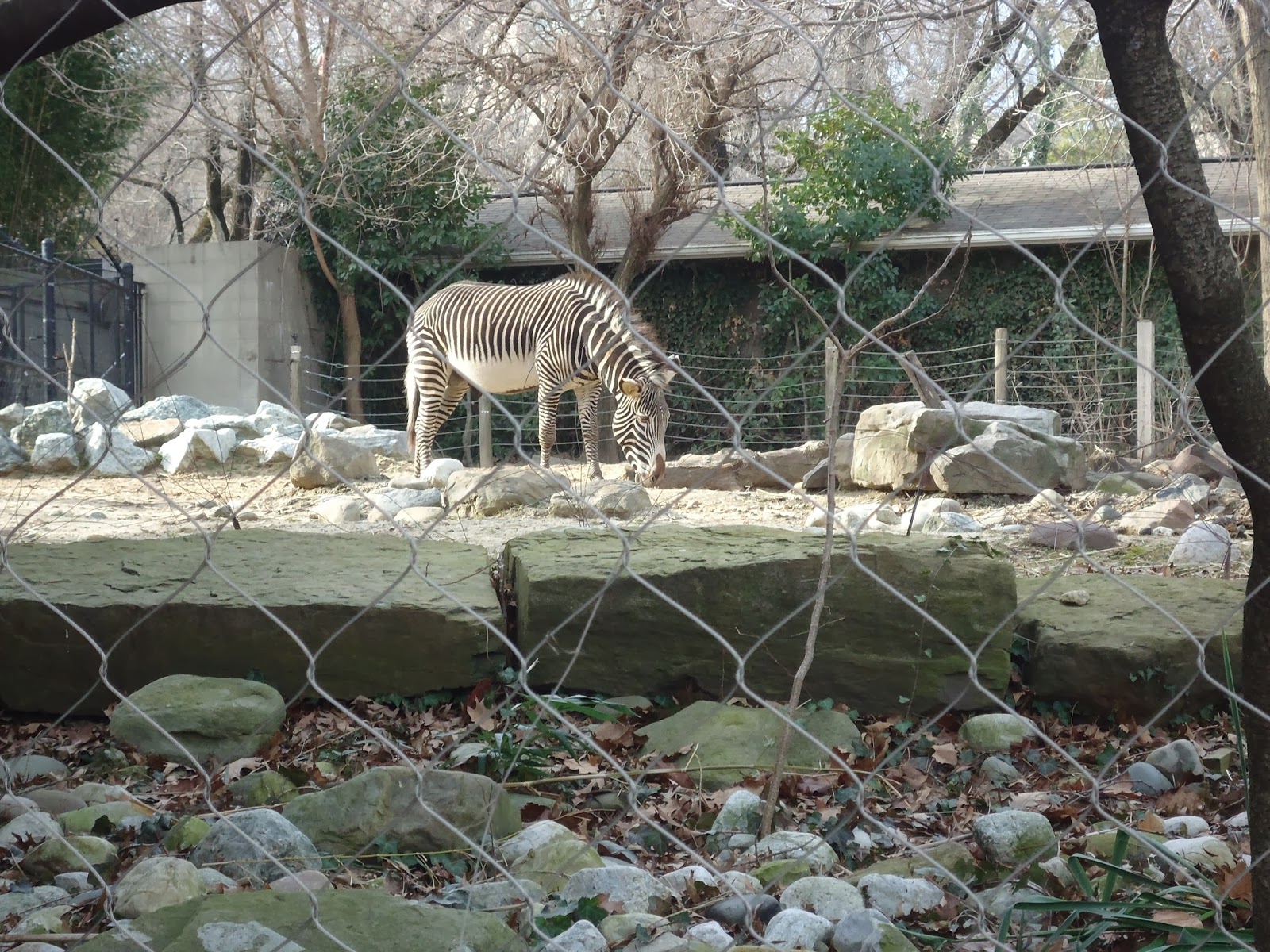 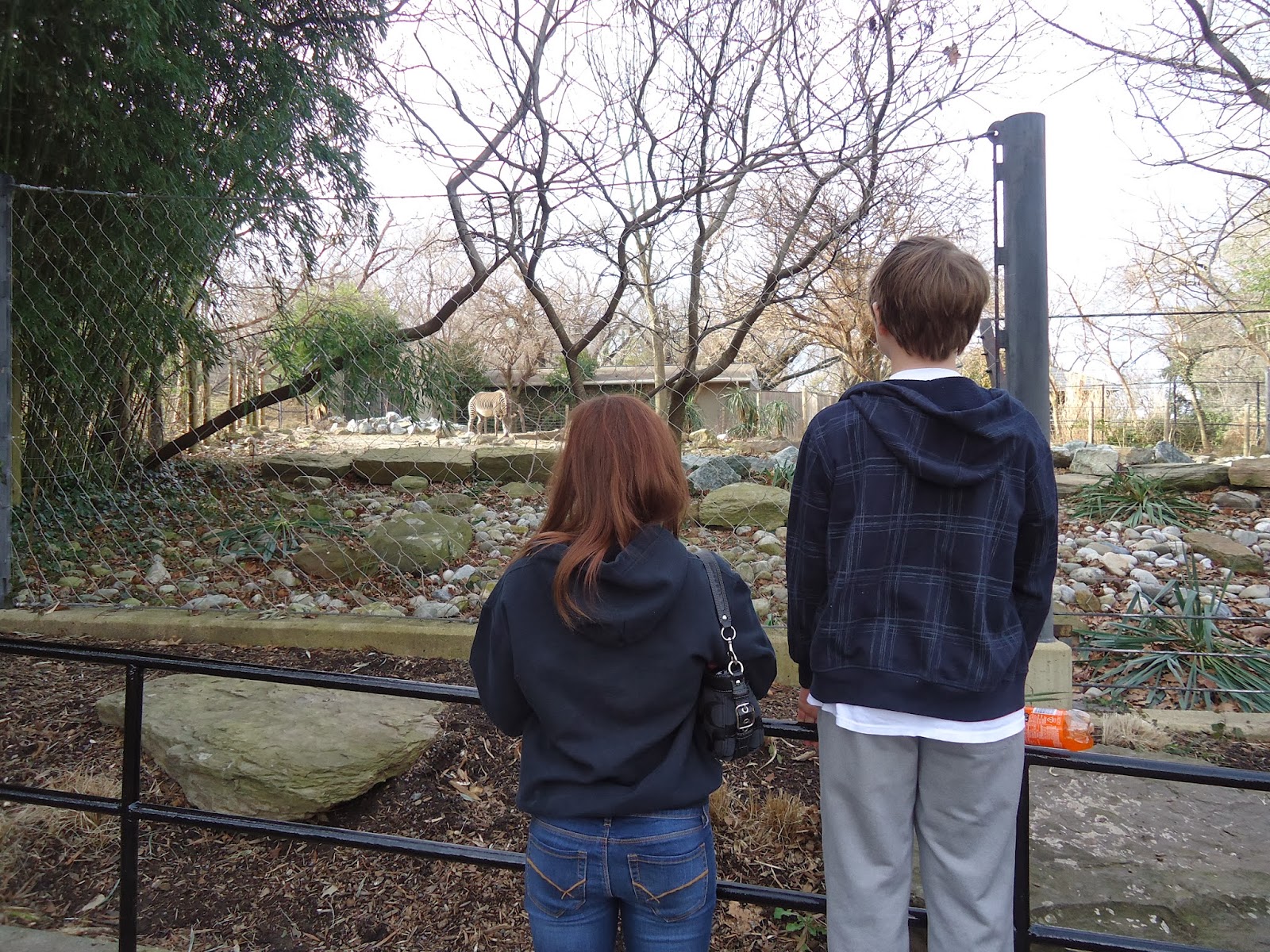 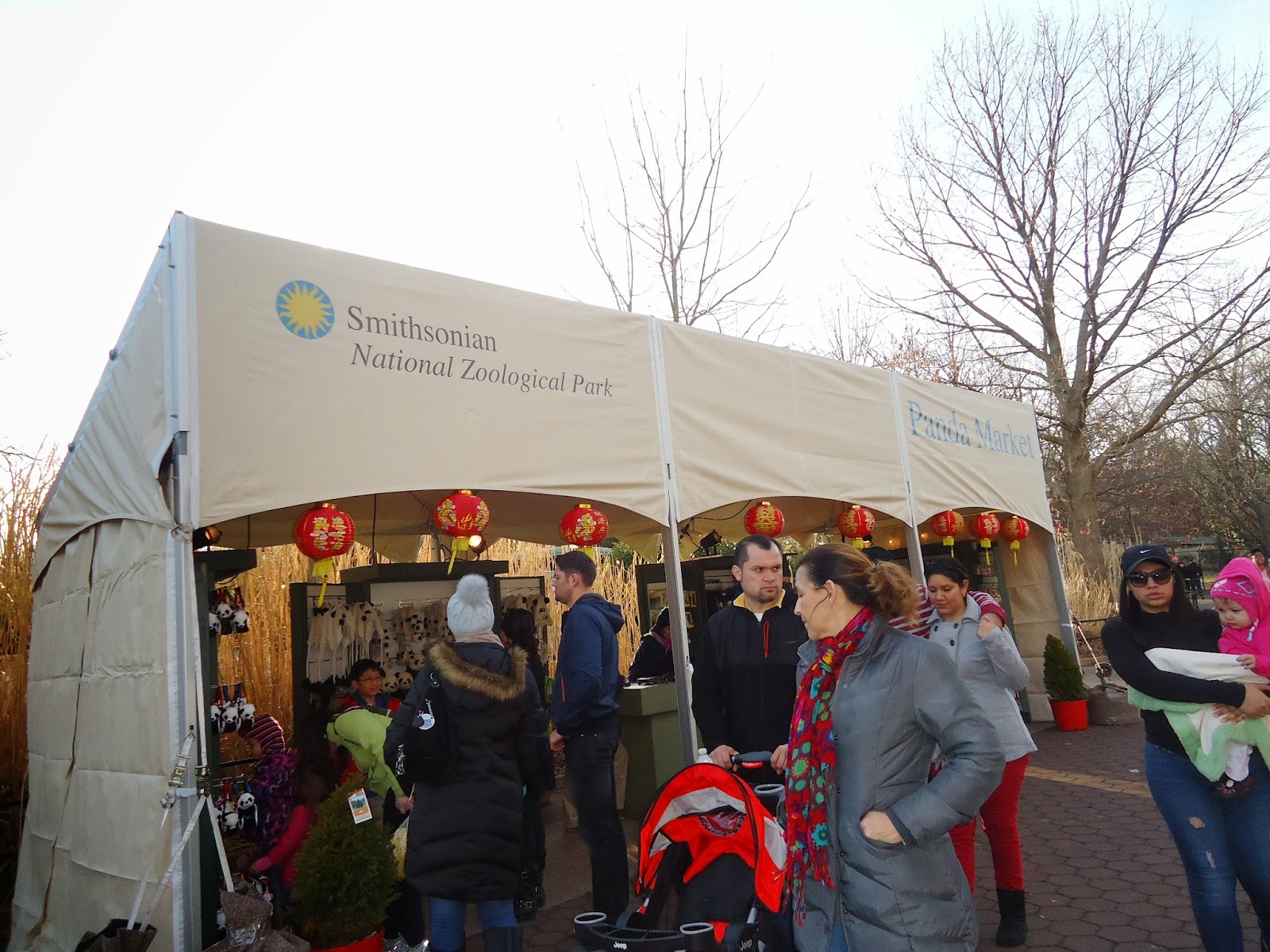 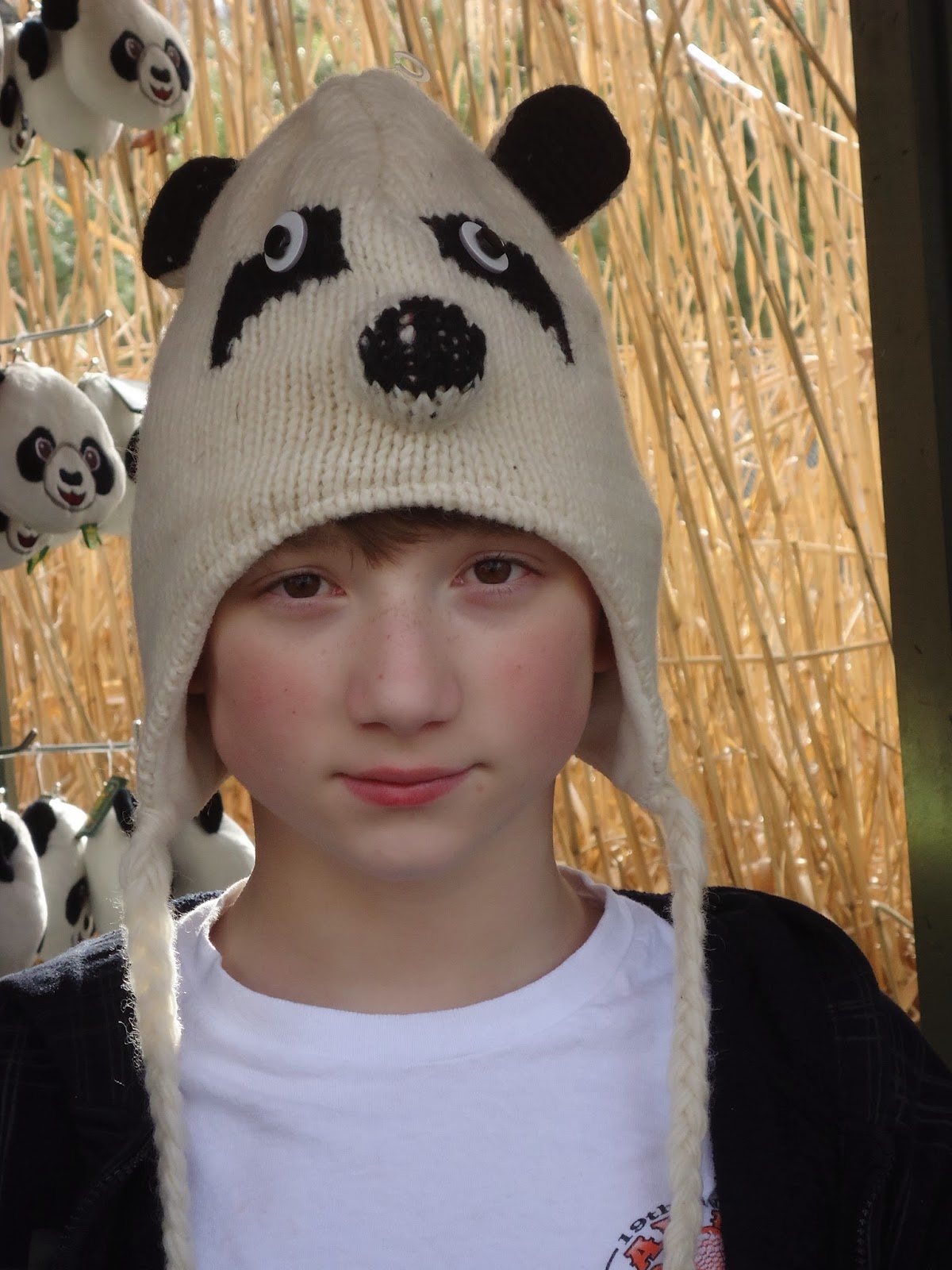 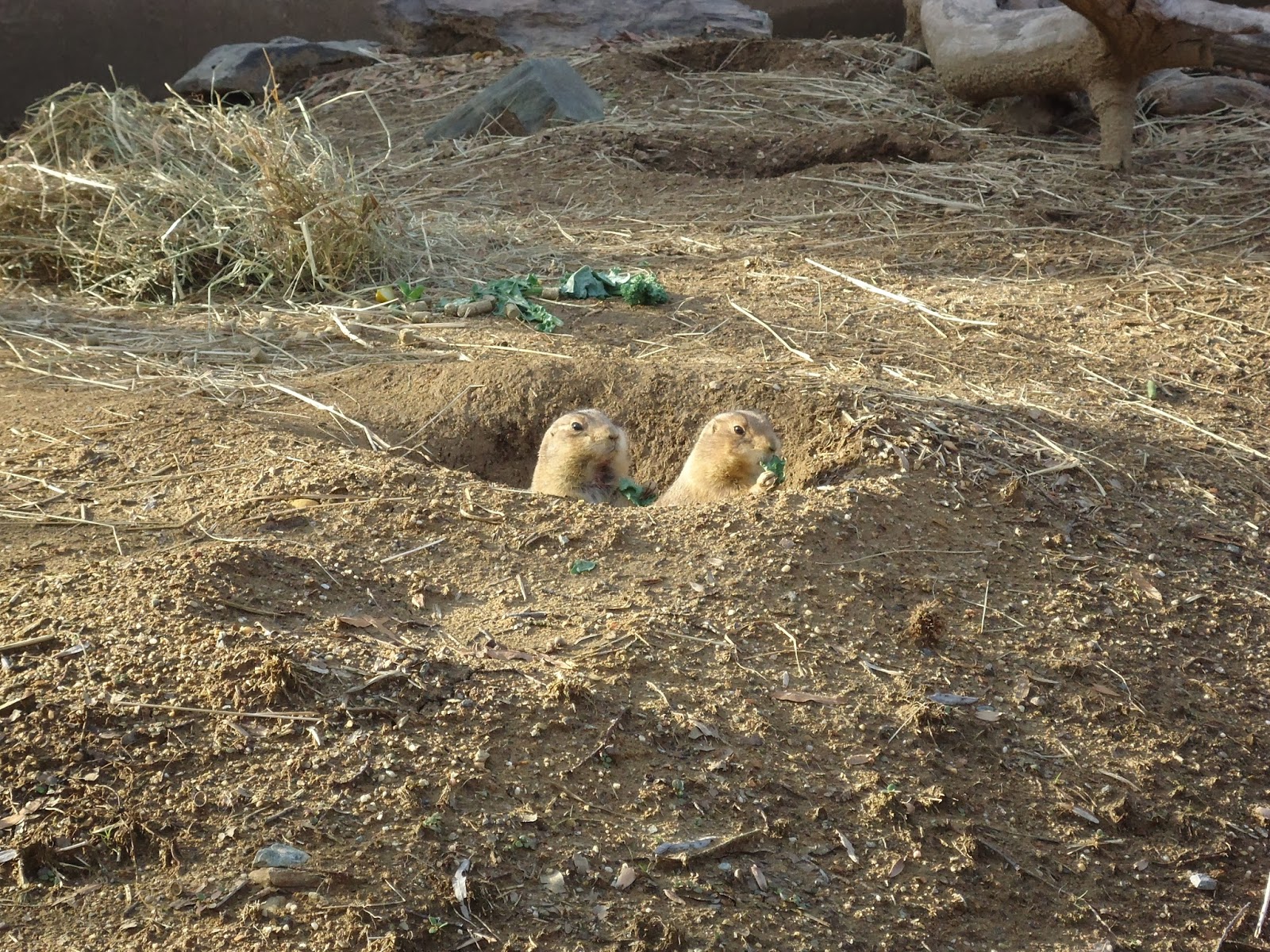 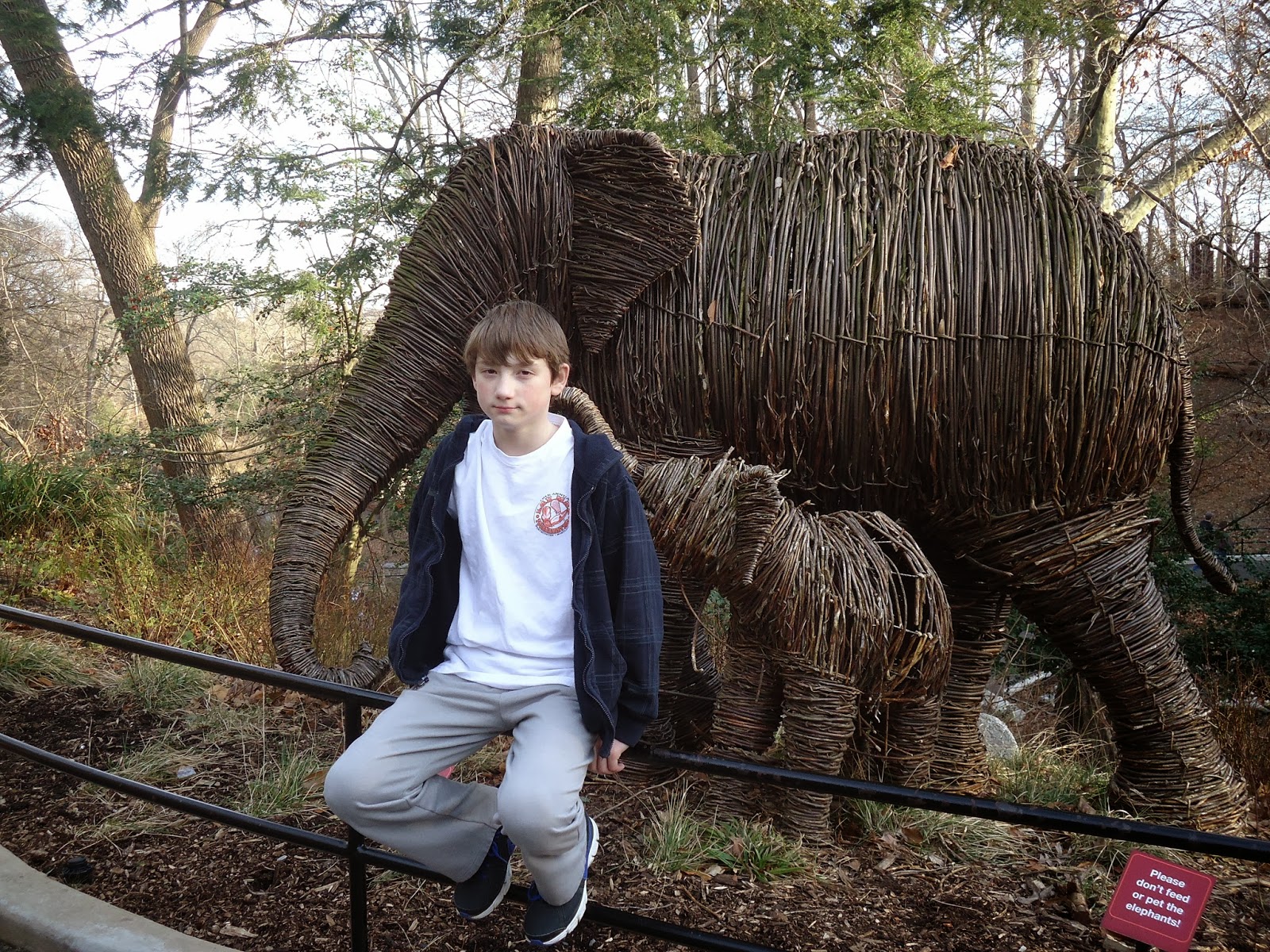 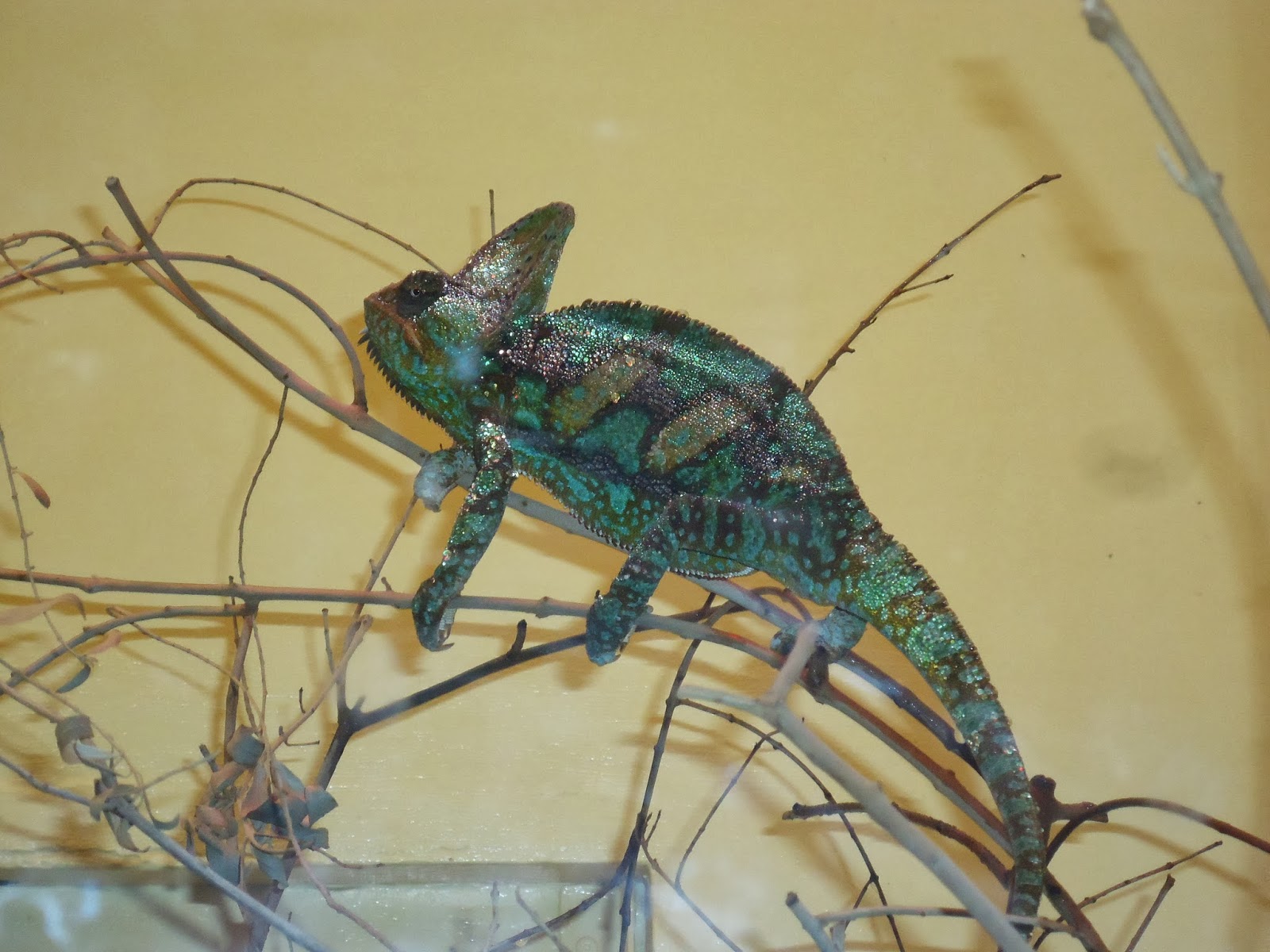 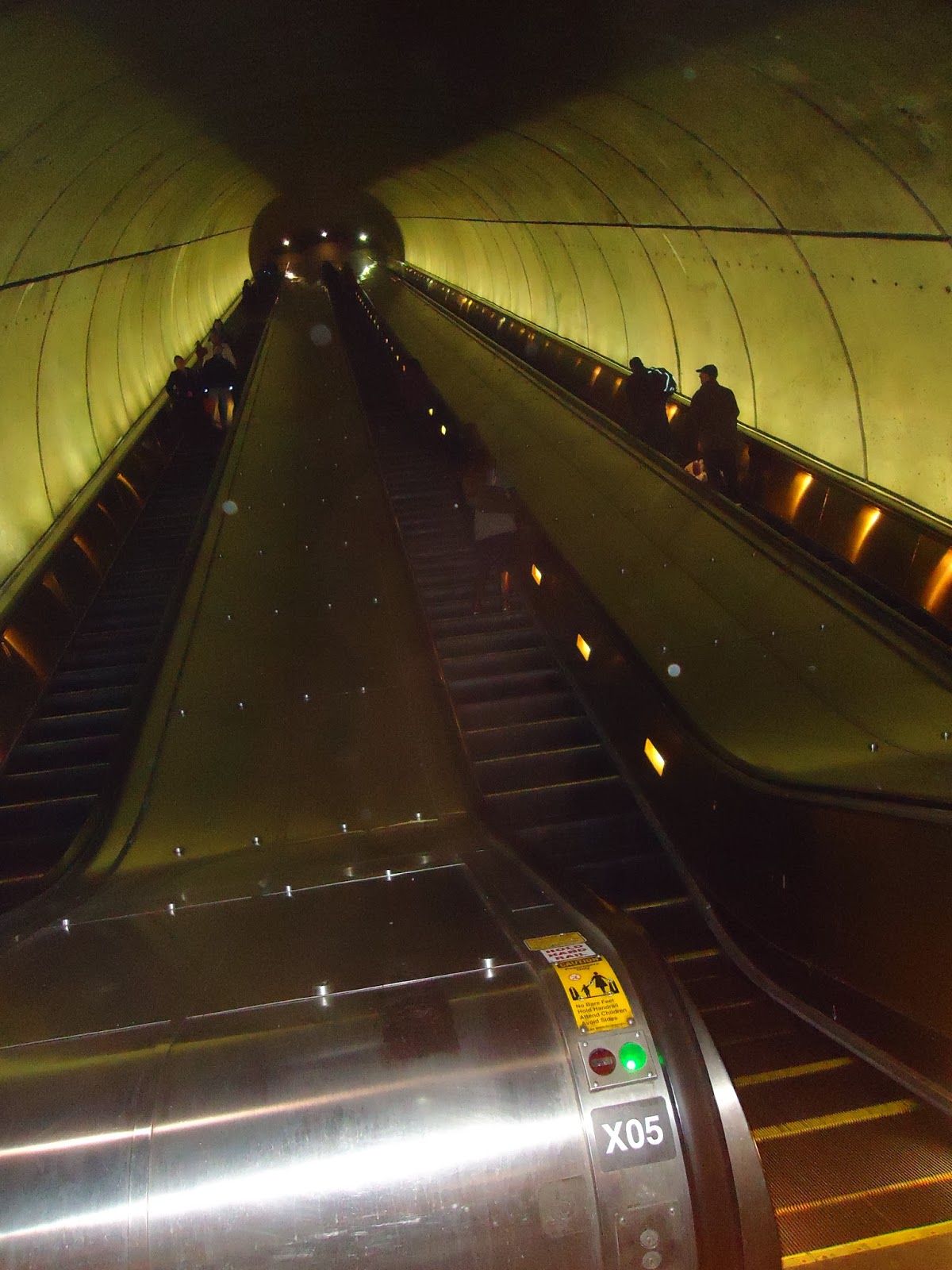 The plan was to go see Bao Bao tomorrow.  When it isn't a holiday, but there isn't any school for us.  I figured the lines would be far shorter.  But, it's going to snow tomorrow.  Maybe, a lot.  Not, like  "anywhere were there is an actual winter a lot", but a lot for here.  If you've ever tried to drive in Maryland when it's raining, you already know what I'm talking about.  So, we went today.

Jac has been sick all weekend.  I thought the fresh air would be good for him.

He was ok-ish for awhile.  Doesn't he look miserable?  I feel sort of bad about taking him out like that.  But, also still convinced sick people should get a little fresh air and exercise if they can.  He's my kid that never gets sick.  It's weird when he's sick.  4 days of being sick?  Unheard of.

The closest we got to Bao Bao was the end of the 3 hour line and the merchandise.  Who stands in a line for 3 hours to look at a sleeping animal?  We'll try again another time.

We did see a really cool lizard.  I'm not really into lizards, but this one is glittery.  Who can't find something to like about a glittery lizard?

That escalator...it's much taller in person.  It used to scare me to take the kids on it when they were little.  Visions of one of them taking a tumble...ugh.

We missed our return train by about 10 seconds.  Probably because I was trying to take a picture of the escalator.  Jac was pretty sure I was trying to put us on one going the wrong direction.  Turns out, not.
Posted by Melissa at 1:48 AM 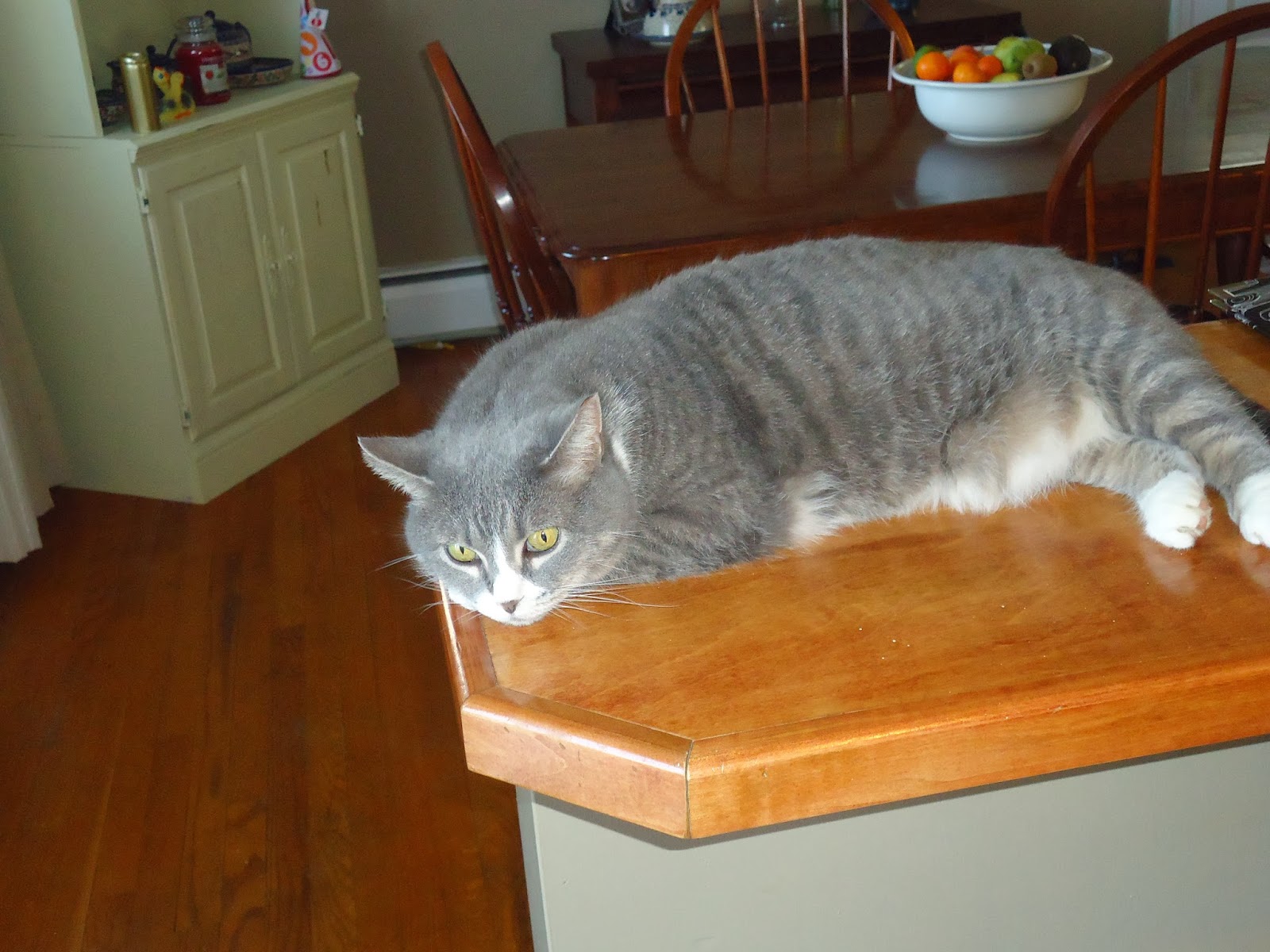 This is Luna Bleu in a state of alarm on the bar.  She's not supposed to be there, but who can be where they are supposed to be when someone is dying?  She was busy rolling her eyes and thinking negative thoughts.  Mostly about the fact we allow horrible things like running out of food to happen.
As soon as my kids turned into teenagers, they started doing this thing.  Mostly, it involves wandering around the house (multiple times a day) in a manner intended to convey they might die at any moment.  Evidently, death is not a quiet process.

Jac is not quite thirteen, so consider him an early bloomer.

In adult talk that translates to "Someone other than I ate all the cereal and it's so unfair we never have Pop Tarts like normal people."

This morning was glorious.  I slept in until 8:30, because Ryan kindly let out our little mutt before the sun came up.  There was a thin layer of freshly fallen snow.  I was enjoying a lovely cup of coffee made from beans a friend brought back from El Salvador.  The light was streaming through the windows just as I like it to do.  All was perfect.

Until the death dance began and I was reminded we don't have any food.

Not having food is a problem.

For a second, I thought maybe we could just go out for breakfast.  (We never do that.)  And then I did this thing.  My thing begins with the fact I am not at all patient and I generally do not believe very many places have food good enough to wait on.  Everyone goes out to breakfast on Saturdays which means I'd have to wait.  Multiple times.  Once just to get everyone together to get out of the house.  Again, to get a table.  Then for the server.  Then for drinks.  And on and on and on.  I can't do it.  The other part of my thing is I think in full pictures.  At the end of that picture was the $50 check for whatever that "inexpensive" family-type restaurant would have served us.  Scrambled eggs and toast, right?

So I said "I'll just make some scrambled eggs and toast." (While being assaulted with words reminding me we don't have any food in the house.)

And then Ryan did his thing.  He's a simple guy in words.  "We can have omelettes."

Please understand that if the offer for omelettes is there, I'm going to go with it.  He's in charge of cooking them.  Primarily, because we have a longstanding feud in this house over the best way to do it.  I say skillet.  He says griddle.  We go with the griddle, because that means he'll be doing it.

And then, somehow, it turned into a feast.  Keep in mind, we don't have any food in the house.  In their defense, it is true we didn't have the right kind of potatoes for hash browns.  Somehow, we worked it out. 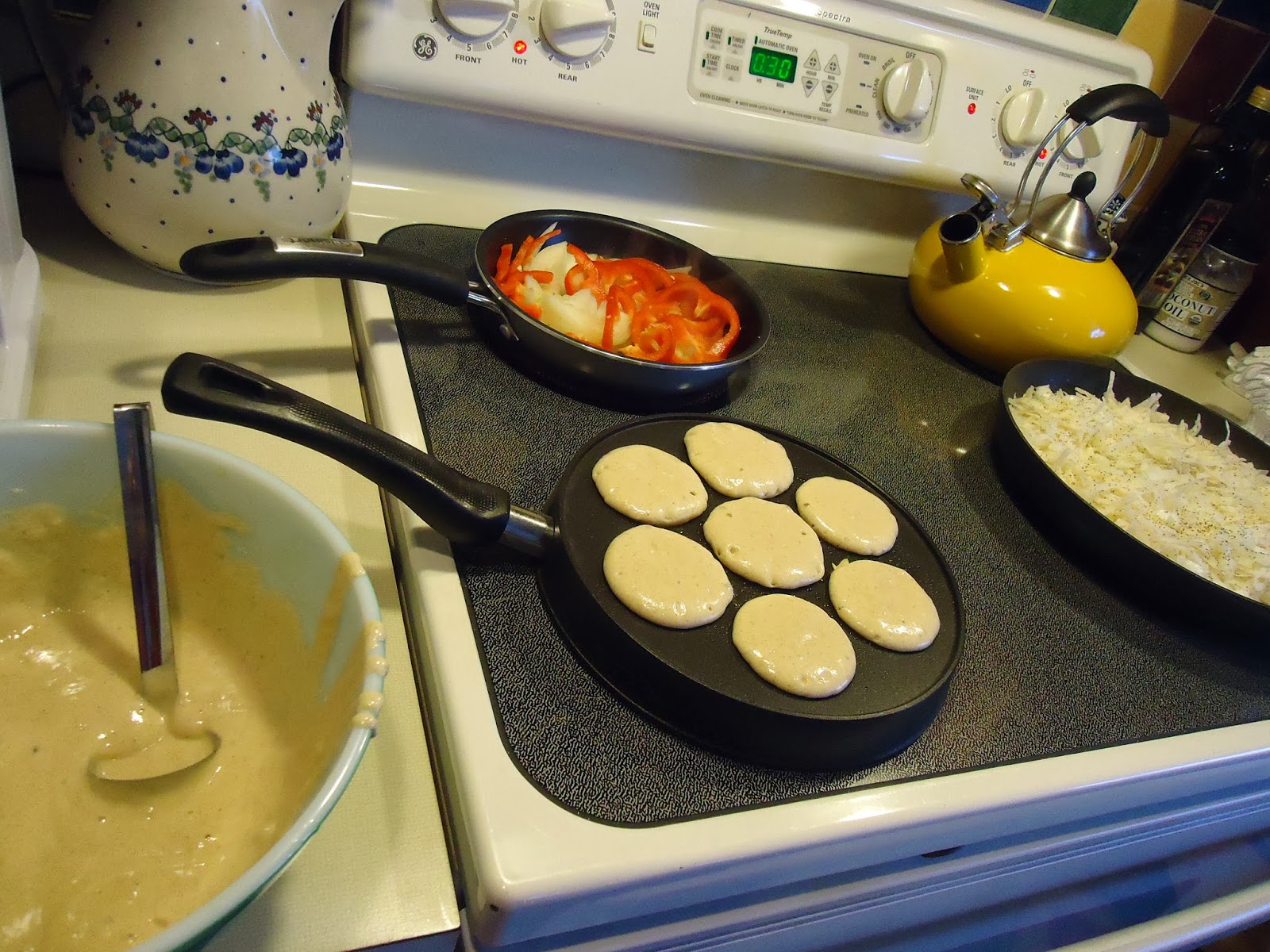 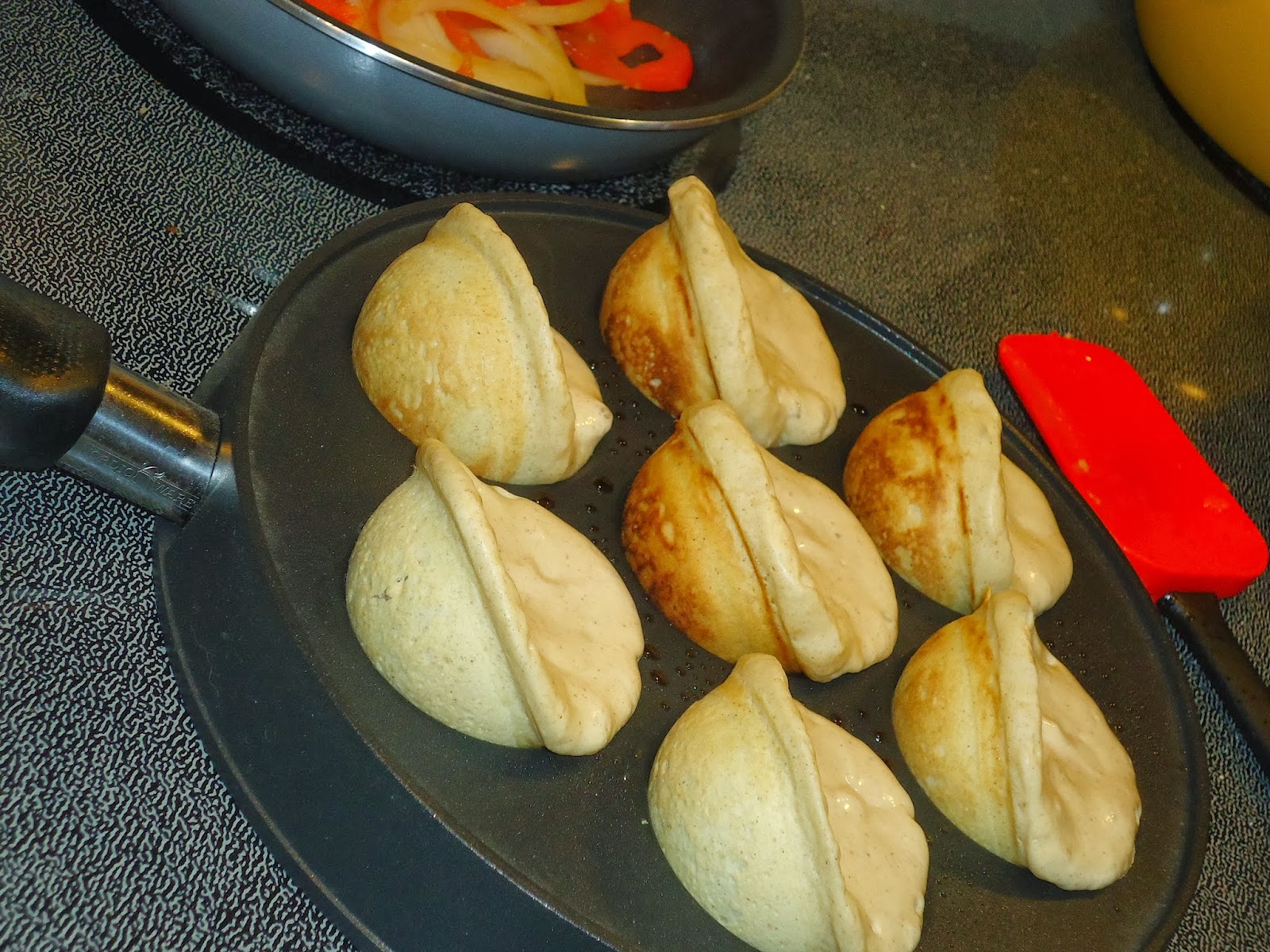 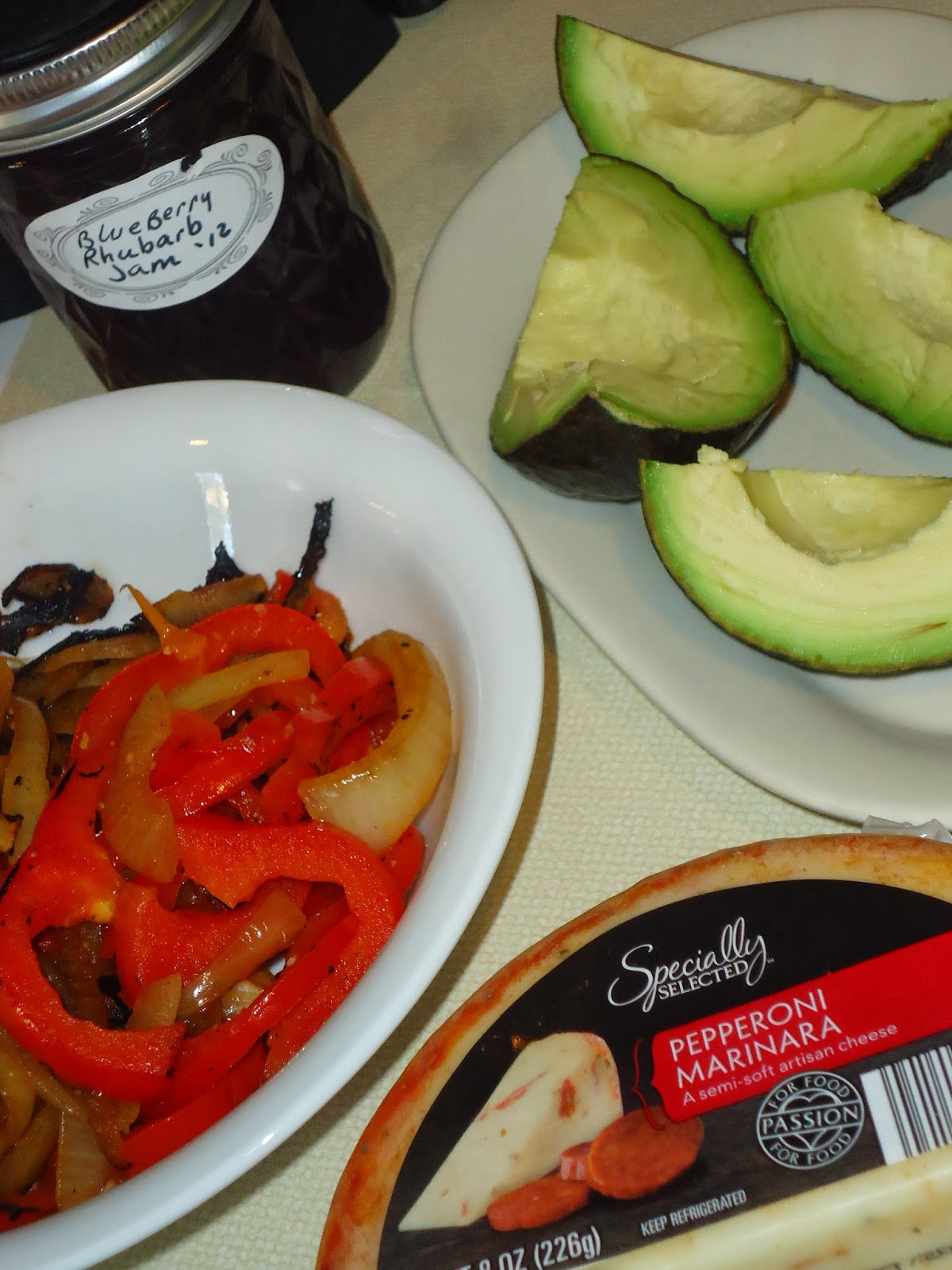 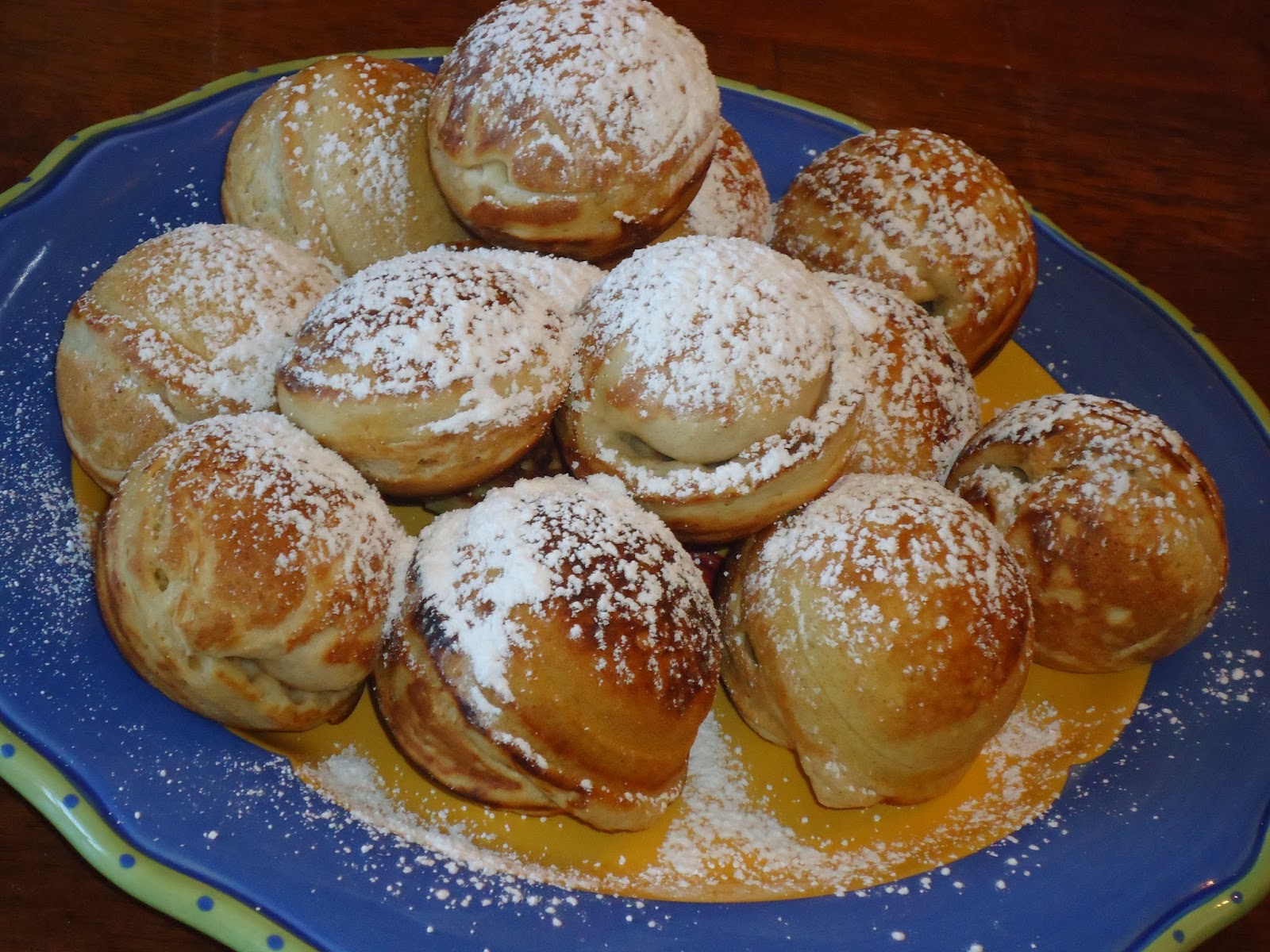 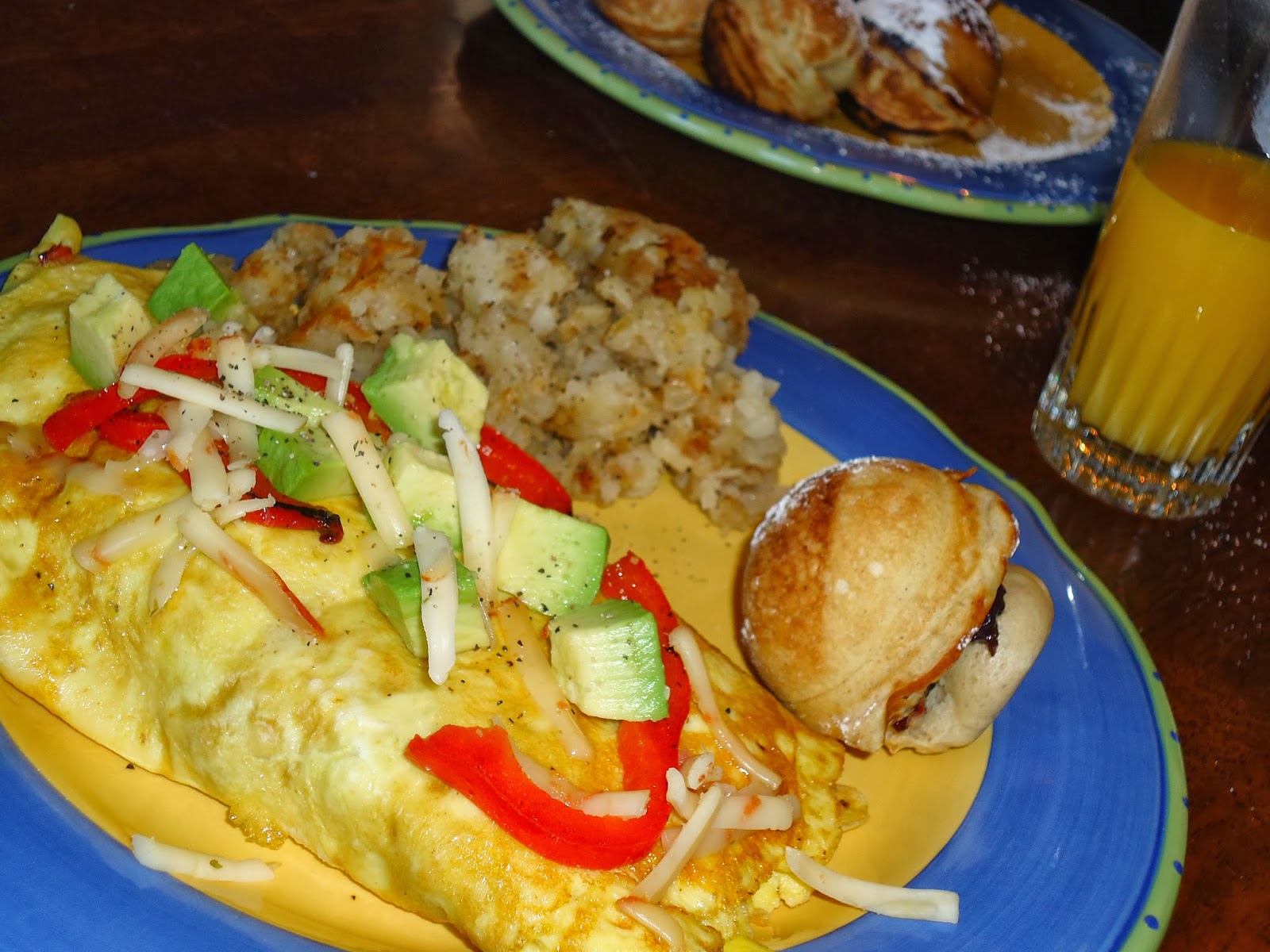 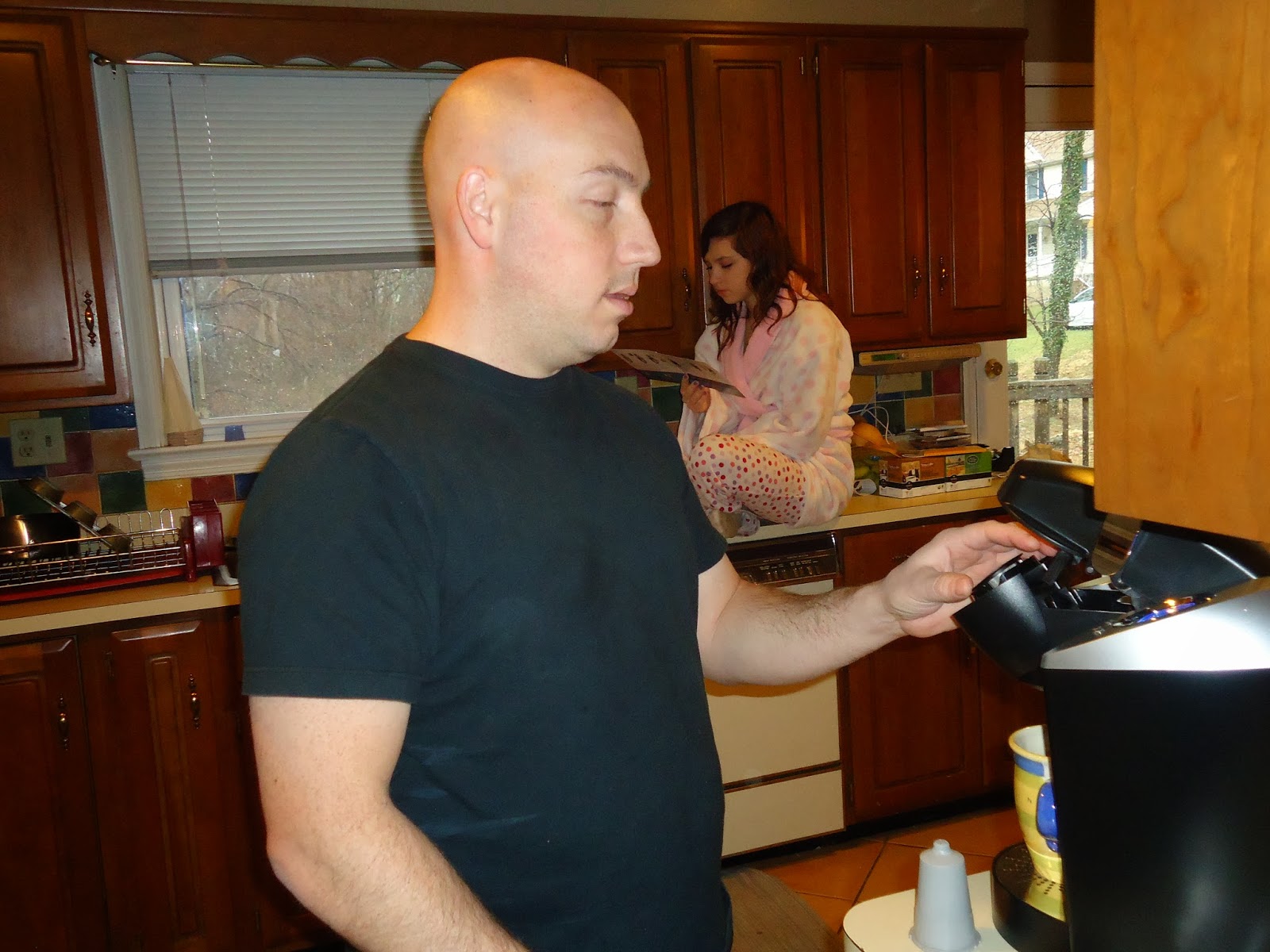 The two of them are everything I am not.
Backstory:  We got a Keurig for Christmas.  I'm not into gadgets, nor do I see the point of this specific contraption.  Who drinks just one cup of coffee?  What about all that plastic going into the trash?  It has been sitting in the dining room, in its box, since Christmas Eve.  I was wondering what we were going to do with it.
I'm wondering no more.
﻿
They are into gadgets.  They can rationalize "You can just make coffee six times if you want six cups."
It took awhile for them to get it set up.  Why?  Because both of them believe instructions are more than suggestions which meant they read every word and followed every initializing procedure.
Ha.  Who has time for all of that?
They do.
The other kid is like me.  In as many ways as this one is not.
Posted by Melissa at 2:23 PM

Because I need another project?

I have nothing to wear.  For a variety of reasons.

Something must be done.

The story of the last 5 days. 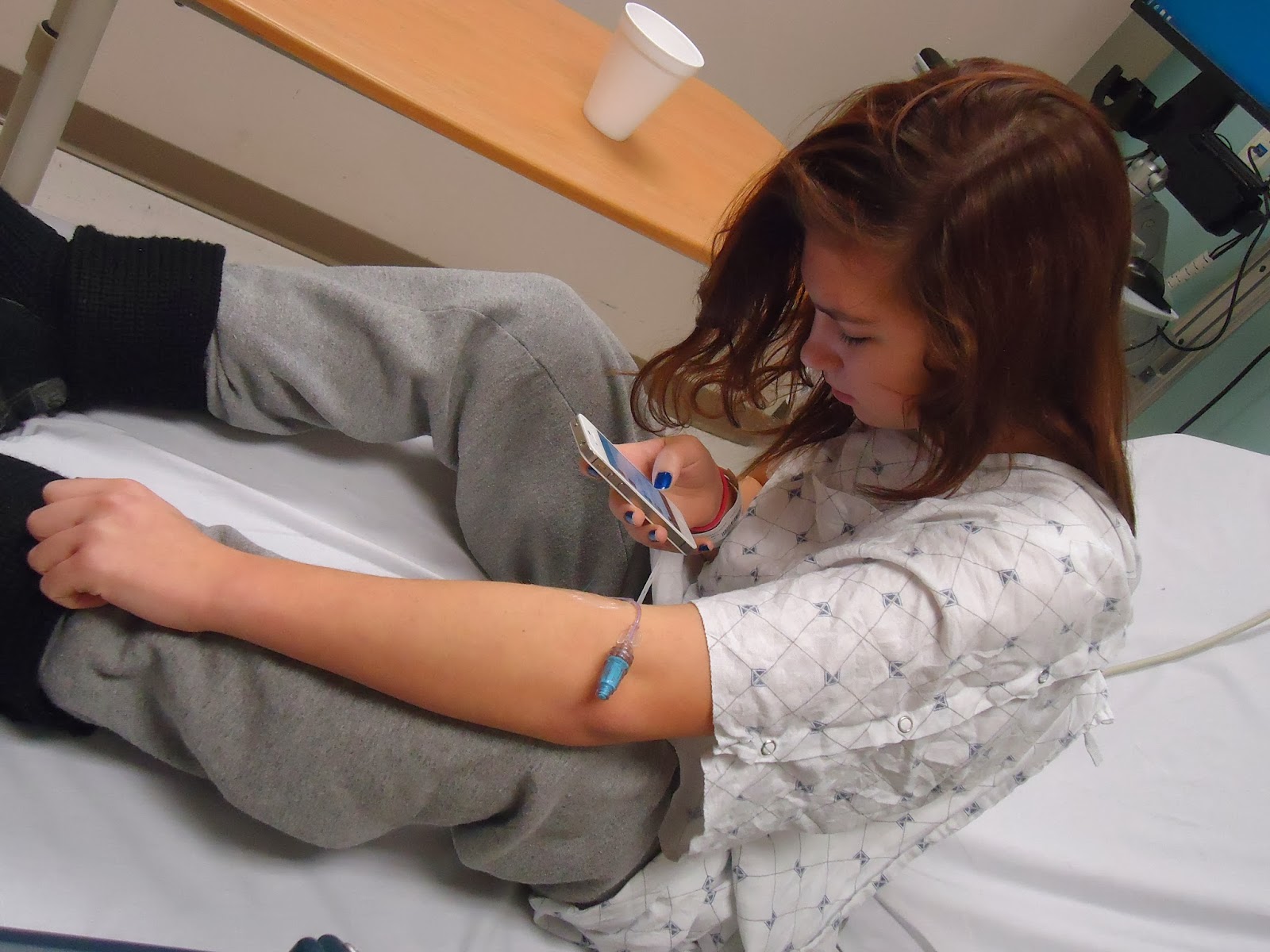 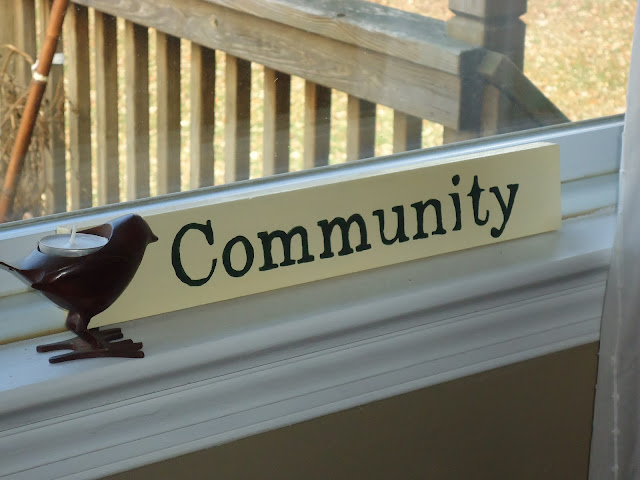